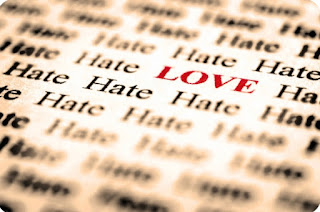 Far past its boiling point, this election has essentially boiled down to two opposing forces: LOVE vs. HATE. Trump supporters are voting out of LOVE for a FEARLESS leader whose ACTIONS speak louder than the empty words and promises of a shameless career politician now embroiled in scandal... while Biden supporters- who can hardly get enthusiastic about their increasingly absentminded, ever more corrupt candidate- vote out of HATE (or seriously disturbing disdain) for Trump as they buy into a false, hate-driven narrative pushed by hate-fueled politicians and media...

Rather than DEFEND the rule of law, Trump haters DEFUND law enforcement and support mob rule to undermine the President they so hate... But if a rioting mob crucified the most blameless man to ever walk the face of the earth, it should come as no surprise today’s haters want to hang President Trump...with raised fists shouting and touting their ‘popular vote’ as if the U.S. election were a popularity contest.

Thank GOD our founding fathers had the wisdom and foresight to design a FOOLPROOF electoral system that would never allow the FRINGES of society to decide the fate of this country. Because it is the HEART of a country that matters... as it is the HEART of a man that matters. “Do not look on his appearance or height, for I have rejected him; the Lord does not see as man sees. Man looks at the outward appearance but the Lord looks at the HEART.” 1 Sam.16:7

So no matter what the political outcome of this battle, I take infinite comfort knowing that in God’s perfect Word and 20/20 vision,