Last Sunday in Rome, my dear friend, Ana and I went to a beautiful Mass, a beautiful dinner and then on a beautiful walk along Via Del Corso... when suddenly we came upon this masterpiece of "chalk art" on the sidewalk! It was a copy of Caravaggio's "Dinner in Emmaus" where Jesus was recognized by the apostles only after breaking and blessing the bread... I started taking pictures... first one, then two... then on the third I asked Ana to take one with me in it... and this SMOKE shows up in the picture!! I looked at Ana and she looked at me, and we knew it was something otherworldly... Then it hit me: Father, Son... and on the third shot-- Holy Ghost... coming right out of Jesus' image and hovering between Ana and me as she took the picture!! "For where two or three are gathered together in my name, there am I in their midst." (Matthew 18:20) ...and if you don't believe that, check out this sequence! 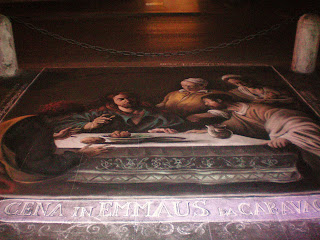 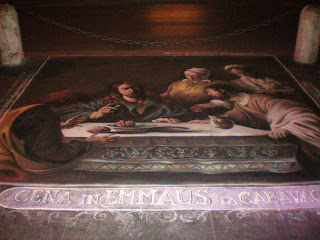 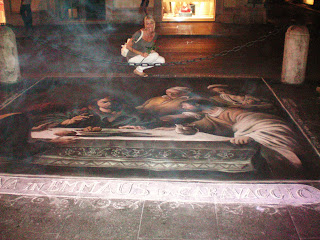 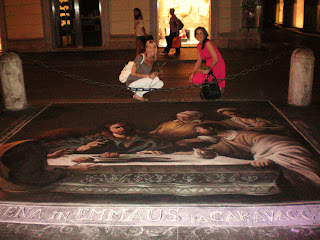 ...a kind passerby took this last one of the two of us...

And that concludes another awesome layover in the eternal city...!

Arrivederci!
Posted by Mary Beth Lavin at 9:49 PM No comments:

During crew break on my last flight to Tel Aviv...

I dreamed I was a passenger sitting in the front row on some sort of simulator... The Captain, sitting right in front of me, turned around and asked, “Are you ready?” I nodded I was, but before I could even take a breath to prepare myself, the bottom fell out from beneath us and we were plunged deep into raging white water rapids... Far beneath the water’s surface, we were propelled along at an enormously high speed, and I was convinced I would die crashing into one of the many jagged rocks around us... Then I saw bubbles leaving the mouth of the man sitting next to me, and I realized I was about to drown, myself... But just as my own breath expired, to my amazement, I found I could somehow breathe under water! The next thing I knew I was walking up a long corridor coming from beneath the ground and leading into the light... I was still dripping from the water, but instead of looking drenched and exhausted, I was glistening, refreshed and invigorated! There were two people waiting for me at the end of the tunnel-- one of my best friends and one friend from work whose name is Angela... Angela was beaming and asked me excitedly, “How did it go??” My best friend looked at me in serious anticipation, awaiting my reply... Then I woke up.

Once again, only now that I write it down, do I understand this dream more in depth... It is obviously a dream of testing. I have had one of the most challenging seasons of my life, spiritually, so I believe God is confirming that I have indeed been put to the test... and by Him- the Captain. But He is also such a loving God that He has protected me from every jagged edge on the course... And while in the depths of despair, when I realized I could no longer breathe on my own, He was and always is the breath of life needed to survive... It is sad to note that I came out of that tunnel alone. The man next to me did not make it. But it is also important for me to understand why I didn’t hear my own answer to the angel’s question (see my “What’s in a Name” post!). “How did it go??” God is leaving that up to me... as my friends look on to see how my faith holds up beneath the surface and under pressure...

This morning, in the book of Job, I saw this side note by Max Lucado. “A time of suffering... may prepare us for a time of counsel...” Since none of us will get through this life without a serious crisis or two, we must counsel each other through the raging waters... to hold onto the life preserver of faith and keep breathing by Him... and to resurface in time a survivor... refreshed and glistening as a fresh water pearl...
Posted by Mary Beth Lavin at 12:07 PM No comments:

Across the Judean Desert...

On another Tel Aviv layover, I took another awesome day tour... this time to Masada and the Dead Sea! I can’t believe how many bible stories I passed along the way– from the Road to Emmaus (where Jesus appeared to the disciples after his resurrection), past Bethany (where Jesus raised Lazarus from the dead) along Jerusalem’s Mount of Olives (where Jesus ascended into heaven) and then (only minutes later!) into the Judean Desert (where Jesus was tested)! We then passed Jericho and the very caves where the Dead Sea Scrolls were discovered until reaching the beautiful blue Dead Sea – across which lie the Jordanian mountains of Moab (from whence came the book of Ruth!) 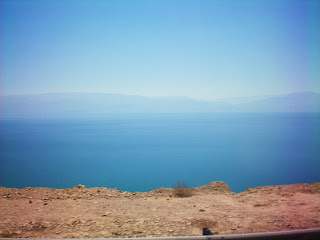 The Dead Sea... (through the bus window!)

For those of you who don’t know, the Dead Sea is so named for the fact that nothing can live in it due to its’ extremely high salt content. I found it particularly amazing that the ancient cities of Sodom and Gomorrah were also located here-- in the lowest and saltiest place on earth (remember Lot’s wife turning into a pillar of salt after looking back...?!) ...and it is, indeed, largely “deserted” to this day!

We first ascended Masada, overlooking the Dead Sea, built between 37-31 BC by King Herod (!) as a palatial fortress for himself in the event of a revolt... He never did use it but sent his wife there, instead (and then later killed her, too!). It is most known, however, for its use by a group of Jewish rebels and their families, who in 66 AD– during the First Jewish-Roman War and after the destruction of the Temple– fled Jerusalem and settled on the mountain top, using it as a base to fight the raiding Roman Empire. 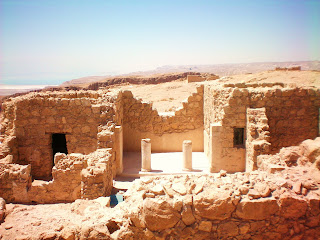 The ancient ruins of Masada... 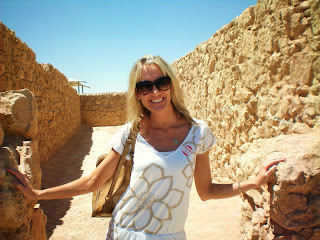 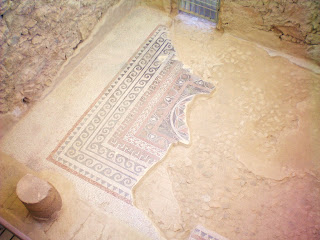 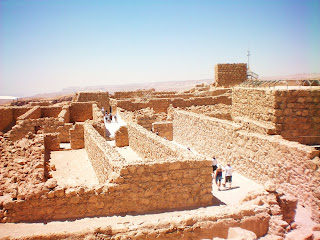 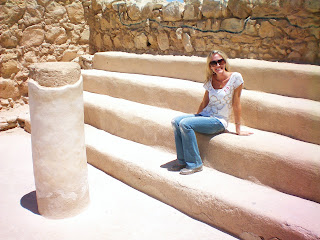 The oldest synagogue in the WORLD... and the most posh place for Bat Mitzvahs, today! ;-) 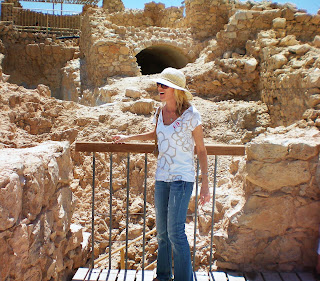 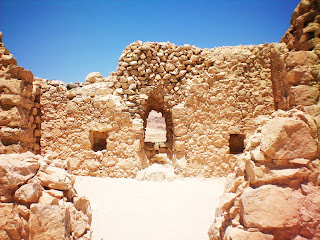 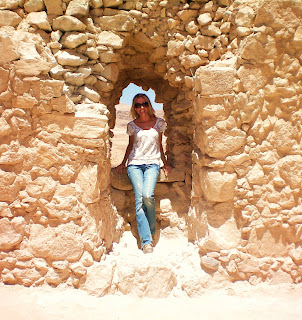 The end of the story is tragic... The Roman troops surrounded Masada by the thousands and built a ramp by which to storm the fortress... The Jewish freedom fighters, seeing their inevitable fate, decided they preferred death to surrender... And so 900 men, women and children committed mass suicide, together on the mountain plateau. The conquering Roman soldiers burst onto the scene to find nothing but dead bodies, a burning fortress and silence... Today Masada is a Jewish cultural icon and symbol of Jewish freedom from oppression. An absolute must see if you ever go to Israel!

After descending Masada, we drove just a few minutes down the road to the world famous En Gedi spa with mineral mud baths and beach access to the Dead Sea. 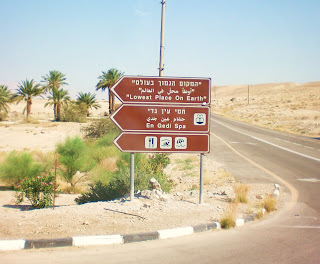 Unfortunately, no one told me to bring a one piece bathing suit, so when I saw the “conservative undertone” of everyone else, I just couldn’t bring myself to do it in a bikini (lol!). So I coated just my arms and legs and looked ridiculous like everyone else for a few minutes before rinsing off...only to then see another woman from our group going topless! Frankly I found the whole mud bath experience totally overrated and a little... gross! 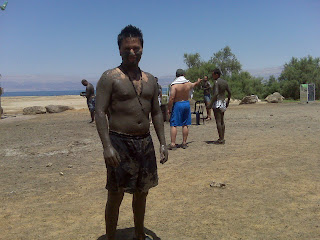 My friend, Leonardo- getting a little dirt beneath his nails! ;-)

Floating in the Dead Sea, however, was awesome... but don’t shave your legs before you go! and don’t go under!! (Why do I have to learn everything the hard way?!) Nothing can sting your eyes like the wicked salty waters of the Dea Sea! 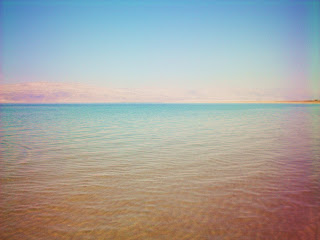 I stole a couple salt crystals off an immersed bicycle exhibit and a floating barge with a fresh water hose (for those who make the mistake of going under!) :-0 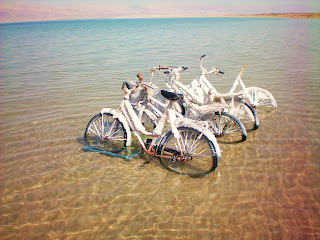 Finally, we headed home and made one stop where I was able to hop on a camel for a ride around the gas station... lol! It was scarier than it looks! 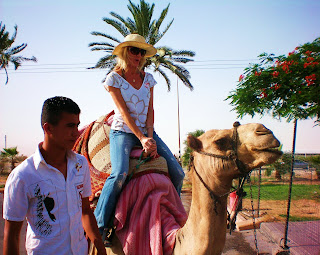 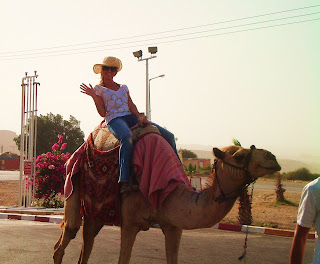 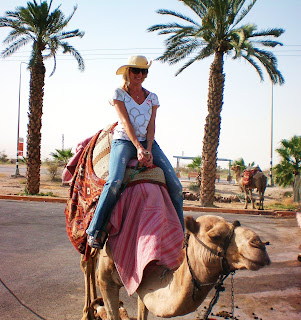 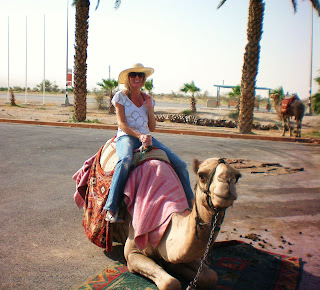 ...thank goodness it's over!
Posted by Mary Beth Lavin at 7:12 PM No comments:

I was actually in the Holy Land when I had this dream a few days ago...

I dreamed I was in the Holy Land, so I really wanted to hear from Jesus while I was in town. I mentioned it to someone who was very close to him, and the next thing I knew, I had a voicemail from Jesus on my cell phone! I was so excited that the most famous person in the universe called me on my cell phone that I was going around to everyone saying “Do you want to hear Jesus’ voice...?! Here– listen...!!” The only problem was, I never did hear the message myself! Then I woke up...

The first thing I thought of was the time I got a personal voice mail from Benicio Del Toro- who was trying to reach his friend who was with me, at the time, without his own cell phone. I listened to that message over and over! lol! But now– and only as I write this down– I am beginning to understand the missed message from my dream... If I was that excited about listening to Benicio del Toro’s voice, how much more excited should I be about listening to God’s voice! Yes, I was excited to know I had a message from Him, but I failed to listen to it... I have always been challenged in the listening department, as I’m sure I have at least a slight case of ADD... But still, I can do better, and I must do better– most certainly when it comes to listening to His voice (...mail! ;-)

God knows I want to share His message with others-- as I did in my dream-- but a good messenger must always first get the message, herself... ouch. :-0 ...message received!
Posted by Mary Beth Lavin at 10:22 AM No comments: